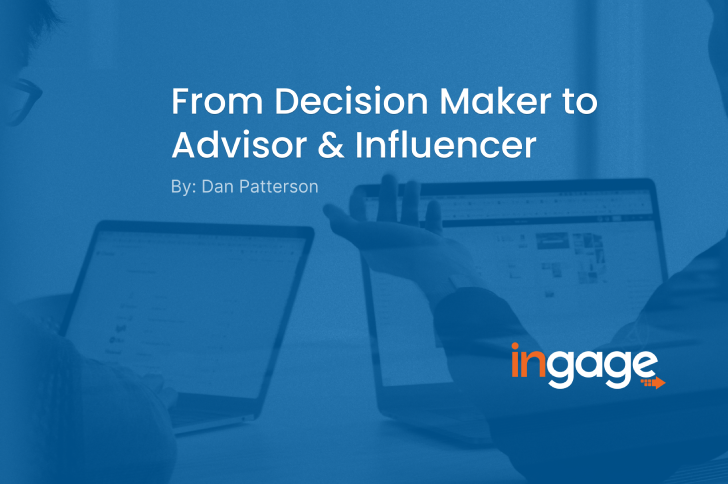 From Decision Maker to Advisor & Influencer

Back in early 2010, I made a career and life-altering decision to move from the corporate world into consulting. I had been climbing the corporate ladder in various roles for almost 19 years at the time, and after having considered making the leap into the consulting world several times since around 1996, I finally decided to do it.

Up until that point, I was blessed with breadth and depth of experience in application development and operations including: custom/proprietary software, packaged solutions, and supporting multiple functional areas within the companies that I worked for. I had worked my way up to being an IT Director in a large corporation, and was increasingly less hands-on from a project implementation standpoint as each year went by. Prior to that, I had worked alongside many consultants over the years, working so closely with them that on more than one occasion, some internal colleagues thought I was part of the consulting team! In late 2009, when I started seriously considering making this change, I came to the realization that I had the same experience as most of the consultants that I had worked with, only from the “other side”. More on this later…

My first consulting engagement in early 2010was with a large corporation in Cincinnati that hired the firm I was with to lead an Oracle Enterprise Resource Planning (ERP) applications upgrade project. This was a software suite of products that I had many years of experience with from a technical, functional and project management perspective, but also something that I had not worked with in about 8 or 9 years. I was assigned to my first project as a lead consultant with two sub-contractors, one of whom was in his first role working with my firm. Needless to say, I was a bit apprehensive, and had to quickly knock some rust off of my Oracle skills, as well as learn on the fly how to be a good consultant. It was kind of an odd feeling, since I had so many years of professional experience under my belt, many in leadership roles - but in some ways felt like a new-hire coming out of college.

Once I got my feet wet on my first engagement, I realized that I would be wearing many hats as a consultant: consulting lead, project manager, technical lead, functional consultant, client relationship manager, testing lead, data lead, software developer, vendor manager, event planner, donut getter and coffee maker (I’m sure I’m missing some). I had gone from leading and managing large teams, being in leadership meetings, being responsible for making big decisions, and everything related to that - to now being a hired utility player, one day presenting to C-level executives, and the next day slinging code or testing data. When working my way up through the corporate ranks, I was able to change teams or groups every 2-3 years for a new experience, so in some ways that’s what I assumed consulting must be like. Now that I was a consultant, I was experiencing it first-hand, and looking ahead to the variety of work that was to come.

One thing that surprised me a bit was that in my consulting role I was no longer the decision maker. I had been in leadership roles for many years on the corporate side, so to some degree I was relied onto make decisions on a daily basis. I had so much project management and implementation experience both from a technical and operational perspective that I knew how to get things done. What I had to learn in my role as a consultant was that it was no longer my responsibility to make decisions. I was a hired resource to get things done, and to weigh in on how to do that, what strategies to take, what resources were required, etc., but ultimately the decisions were no longer mine to make. It probably took me 6-8 months to adjust to this new reality and to figure out that I had some new skills to hone and improve - those of being an influencer and advisor. I thought I had decent “soft” skills from my roles on the corporate side, but I really didn’t have great influencing skills, as my instinct was to say “you need to just do it this way” instead of leading my client to the decision while helping them along their decision path.

Early in my consulting career, my manager and I were chatting about how things were going and I mentioned that I felt like I had some ground to make up compared to the other more experienced consultants in our group. I had been one of if not their first “outside” hire, meaning that all of the other consultants had worked mostly in the consulting space -whereas I came from 19 years on the corporate side before moving into consulting. My manager told me that he thought I brought something more to the table than those that had only been consultants their entire careers . I had natural empathy for my clients in their roles as managers, directors, and CIOs- since I had been in corporate leadership roles and therefore I understood how many other priorities and situations they had to deal with. I knew intuitively when to back off and realize that my issue or problem to resolve on the project I was managing was one of 10 or more that they were dealing with. I could also help them in an advisory role, in addition to my project management capacity, and would get pulled into discussions where decisions had to be made. I was being asked to weigh in on HR, organizational and strategy decisions that were beyond my “scope of work”, because of the experience that I brought to the table. This experience and realization gave me more confidence as a consultant, and it also helped me to hone my influencing skills. It became one of my more marketable skills.

I’ve now been in the consulting space for over12 years - a little more than a third of my career to date. I’ve continued to hone my skills as a consultant, an advisor and a leader. As a consultant, I see one of our most important roles is to help our clients succeed and to allow them to get recognized for it - even if we are behind the scenes at times. The further I get in my career (and in life, to be honest), the stronger I feel how amazing it is what you can accomplish if you don’t care who gets the credit. Asan advisor, I’ve learned how to frame conversations and discussions so that folks can see and better understand the situation or approach in order to factor it into their decisions. As a leader, this experience has allowed me to continue to improve on surrounding myself with great people, then getting out of their way so they can shine - while also helping to knock down barriers and help them whenever needed.

At the end of the day, we succeed as a collective where everyone brings their own value. My experience and transition from decision maker to advisor and influencer has made me a better overall leader, with less of an ego and having more awareness of the bigger picture professionally and personally.